Read again slowly…find a word or phrase that catches your eye or moves your heart…slowly repeat it…pray your thoughts, desires, needs, and feelings from your meditation…enjoy the presence of your Lord and Savior.

Holy God, lead me to repentance that brings life. Not the groveling show that’s more about convincing you I’m worthy of your forgiveness, but the cut-to-the-heart kind of repentance that is grieved at my sin because of your holiness and glory. Move me by your mercy and lead me to a life of joyful obedience. Amen. (prayer based on the Westminster Confession, Question 15.2).

In Memoriam XXVIII by Tennyson (art by Linda Richardson)

The time draws near the birth of Christ:
The moon is hid; the night is still;
The Christmas bells from hill to hill
Answer each other in the mist.

Four voices of four hamlets round,
From far and near, on mead and moor,
Swell out and fail, as if a door
Were shut between me and the sound:

This year I slept and woke with pain,
I almost wish’d no more to wake,
And that my hold on life would break
Before I heard those bells again:

But they my troubled spirit rule,
For they controll’d me when a boy;
They bring me sorrow touch’d with joy,
The merry merry bells of Yule. 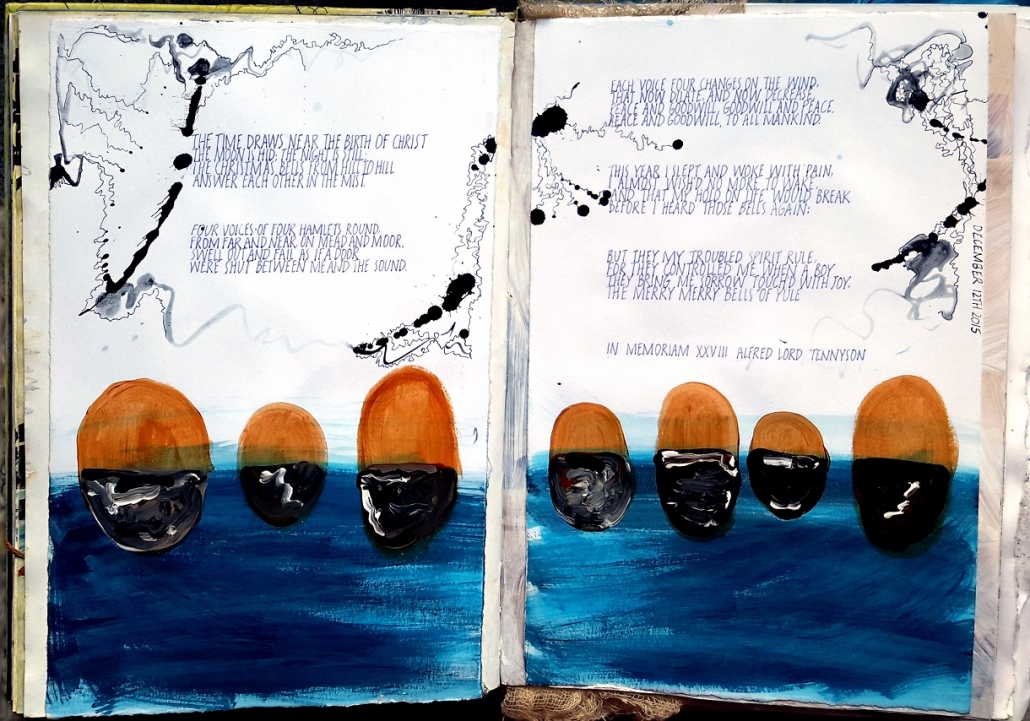 This is a very strange artwork, so if you are looking at it wondering, ‘What is this?’, you would be forgiven for thinking it strange too. However we sometimes miss the meaning in the things that happen to us because they don’t appear in the way we expect. I would, as much as possible, like to keep to the spirit of the art journal I made and include even this strange one. If you are responding to the poems by making or doing something, perhaps you too are dissatisfied by the outcome. It is a challenge sometimes to let it be what it is, so perhaps returning to it later you might be surprised to see a depth you didn’t notice at first.

The round forms dominate the image, floating, it seems in a blue haze. The forms are in two halves, ‘answering each other in the mist’. Some of the forms, ‘swell out and fail as if a door were shut between me and the sound’. The blue haze at the bottom of the image might be our unconsciousness where much is darkness and confusion. We barely understand why we behave in the way we do and why we react emotionally to seemingly small events. We wake from dreams, sometimes afraid or grieving for something we feel we have lost or missed. This is an image of contrasts speaking to each other, of sorrow and joy, sleeping and waking, peace and pain. Are the strange round forms waiting to rise out of the blue of unconsciousness? What will lift them up to the light?   ‘The moon is hid: the night is still’. Do you sense the stillness of the round forms that are perhaps brooding egg shapes, waiting for new birth? ‘Be still and know….’

“Praise be to the Lord, the God of Israel, because he has come to his people and redeemed them.” (Luke 1:68)